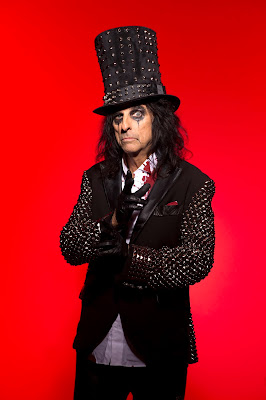 Dr. Phillips Center for the Performing Arts
in association with Live Nation presents
SPEND THE NIGHT WITH
ALICE COOPER
Sunday, August 14, 2016 at 8 p.m.
Tickets on sale Friday, April 15, 2016 at 10 a.m.

The Dr. Phillips Center for the Performing Arts, in association with Live Nation, announces the Orlando engagement of Spend the Night with Alice Cooper. The legendary musician and “architect of shock-rock,” known for rattling cages and undermining the authority of generations of guardians of the status quo, will bring his personal brand of psycho-drama and dark, horror-themed theatrics to the Walt Disney Theater on Sunday, August 14, 2016 at 8 p.m.  Tickets for the performance will be on sale to the public Friday, April 15, 2016 at 10 a.m. Tickets start at $45.00 and may be purchased online at drphillipscenter.org, by calling 844.513.2014 or by visiting the Dr. Phillips Center Box Office at 445 S. Magnolia Avenue, Orlando, FL 32801 between 10 a.m. and 4 p.m. Monday through Friday, or 12 p.m. and 4 p.m. Saturday. Online and phone ticket purchases include handling fees. VIP packages are also available at alicecooper.com.

Cooper was born in Detroit, Michigan and moved to Phoenix with his family. The Alice Cooper band formed while they were all in high school in Phoenix and was discovered in 1969 by Frank Zappa in Los Angeles, where he signed them to his record label. Their collaboration with youth record producer Bob Ezrin led to the break-through album, “Love it to Death,” which hit the charts in 1971, followed by “Killer,” “School’s Out,” “Billion Dollar Babies” and “Muscle of Love.” Each new album release was accompanied by a bigger and more elaborate touring stage show. 1974 saw the release of a “Greatest Hits” album. Cooper released his first solo album, “Welcome to My Nightmare” in 1975, accompanied by the legendary, groundbreaking, theatrical “Welcome to My Nightmare” concert tour. Associated with that album and tour was the groundbreaking network television special, “Alice Cooper: The Nightmare.” Other film and television appearances include “The Muppet Show,” Mae West’s last film, “Sextette,” “Roadie,” “Sgt. Pepper’s Lonely Hearts Club Band,” and appearances on “The Tonight Show starring Johnny Carson” and Tom Snyder’s “Tomorrow Show.” The original band also made an appearance in the movie “Diary of a Mad Housewife” in 1979, and filmed the full-length feature film, “Good to See You Again, Alice Cooper.” Cooper also appeared in a 1972 episode of “The Snoop Sisters.”

Cooper’s solo career skyrocketed in the late 1970s with a succession of hit singles, including “You & Me,” and classic albums, including “Lace and Whiskey,” “From the Inside,” and bigger and even more elaborate concert tours.