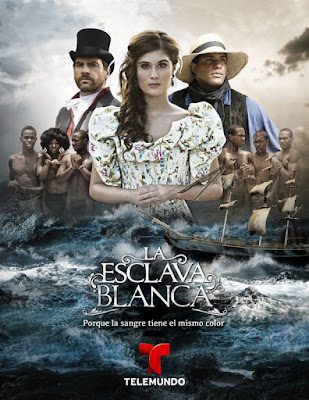 Shattering Ratings Records in Colombia, the Production Narrates the Story of a White Woman, Raised by Slaves, Who Fights to Bring her Parents’ Killers to Justice and Free her Adopted Family

With the addition of this new production to TELEMUNDO’s primetime lineup, “Eva La Trailera” will now air at 8pm/7c, followed by “La Esclava Blanca” and the SUPER SERIES™ “El Señor de los Cielos” at 10pm/9c. Beginning that same day, viewers will be able to enjoy “¿Quién es Quién?” in its new 1pm/12c timeslot.

“La Esclava Blanca” narrates the story of Victoria (Camacho), a young woman saved from death and raised in secret by a family of slaves. Forced to leave her loved ones, on the grounds that a white woman should not associate with slaves, Victoria returns home a marchioness determined to take on anyone who tries to stop her from freeing her adoptive family, confront her parents’ killers, and reunite with the love of her life, Miguel (Suarez).

Born in Spain, Nerea Camacho, who at the age of 12 became the third youngest actor to win a Goya Award, plays “Victoria Quintero,” an indomitable white woman with the heart and soul of a rebellious slave. Meanwhile, Spanish actor Miguel de Miguel returns to TELEMUNDO in the antagonist role of “Nicolás Parreño,” an unscrupulous and ambitious businessman who will do anything to keep his hold on power and money. Also joining the cast, in his first appearance in an international production, is Cuban actor Orian Suarez with the role of “Miguel”, and Modesto Lacen, recently seen in the network’s hit bio-pic music series “Celia,” who will bring to life the role of “Tomás.” The stellar supporting cast includes Luciano D’Alessandro, Miroslava Morales, Ricardo Vesga, Viña Machado, Andrés Suárez and Natasha Klauss, among others.
Written by Eduardo Galdo and María Helena Porta and directed by Liliana Bocanegra, “La Esclava Blanca” is a production of Caracol Televisión.