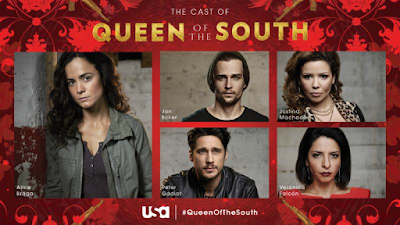 ABOUT THE CAST:
Alice Braga
Alice is a Brazilian actress who has appeared in several Brazilian films, most notably as Angelica in 2002's highly-acclaimed "City of God" and as Karina in 2005's "Lower City". Alice came to international prominence after her role in "I Am Legend" in 2007, and has since become a major player in Hollywood appearing in films such as "Repo Men", "Predators", "The Rite" and "Elysium".
Verónica Falcón
Veronica is a Mexican actress-choreographer with over 100 credits to her name in film, theater and television. Veronica plays the role of Camila Vargas in "Queen of the South".
Justina Machado
Justina Machado is an American actress of Puerto Rican descent. She is best known for her role as Vanessa Diaz on the HBO drama series, "Six Feet Under". Justina plays the role of Brenda Parra in "Queen of the South".
Peter Gadiot
Peter is an English film and television actor known for his roles in "Tut" and "Once Upon a Time in Wonderland". Peter plays the role of James Valdez in "Queen of the South".
Jon Ecker
Jon is best known for his roles as Aaron "Ari" Morales in "Popland", Pablo Peralta in the telenovela "Corazón valiente", Nicolás "Nico" de la Vega in "Gossip Girl: Acapulco" and Marlon Brando in the film "Cantinflas".
#QueenoftheSouth
Publicadas por Axel a la/s 12:42:00 p. m.