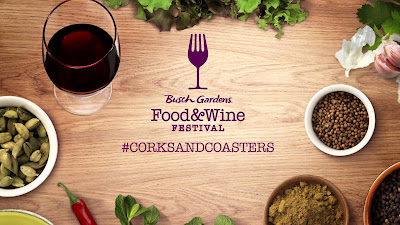 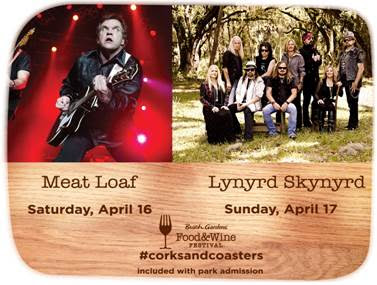 
Two of America’s most legendary rock icons, Meat Loaf and Lynyrd Skynyrd, take the stage this weekend at Busch Gardens® Tampa Bay’s second annual Food & Wine Festival.
The festival takes place on Saturdays and Sundays now through April 24.  Concerts are at 6 p.m. and are included with any Pass, Fun Card or daily admission.

Meat Loaf- Saturday, April 16 at 6 p.m., Gwazi Park
For the past 40 years, Meat Loaf has been a towering monument on the musical landscape. His legendary 1977 album, “Bat Out Of Hell,” transformed this former stage actor into one of the great American rock and roll icons of all time. With its staggering operatic sound and impassioned vocals, “Bat Out Of Hell” has sold more than 44 million albums worldwide and remains one of the best-selling albums in the world to date. Three multi-platinum albums soon followed, including hits like the Grammy award-winning “I’d Do Anything for Love (But I Won’t Do That),” “Paradise by the Dashboard Light” and “Two Out of Three Ain’t Bad”.

Lynyrd Skynyrd- Sunday, April 17 at 6 p.m., Gwazi Park
The rock and roll powerhouse of the ages owns a catalog of over 60 albums, surpassing sales beyond 30 million worldwide. These Rock and Roll Hall of Famers remain a cultural icon that appeals to all generations. Their beloved classics have turned into American rock anthems, such as “Sweet Home Alabama,” “Freebird” and “Gimme Three Steps”.

In addition to chart-topping concerts, this year Busch Gardens Tampa Bay has added more ways to savor the festival including:

·         Wine by the Bottle – Guests can take home a part of the Food & Wine Festival with wine available for purchase by the bottle in select gift shops, including Xcursions, Nature’s Kingdom and the Painted Camel Bazaar.

The Festival features 11 different culinary cabins that guests can experience throughout the park, each with its own special menu including two new cabins, Artisan Eats and the Garden Gate Café. The Festival menu features more than 35 delectable dishes designed specifically for the event with more than 15 all-new dishes, including duck tacos, lobster ravioli, truffle fries and almond coconut truffles. Plus, Festival classics like bacon mac & cheese and the griddled cheese cake sandwich are back by popular demand.
Be the first to know about new events, special deals and future announcements by following the park’s blog at BuschGardensTampaBlog.com, or “Like” the Busch Gardens Facebook page, and follow @buschgardens on Twitter and Instagram.