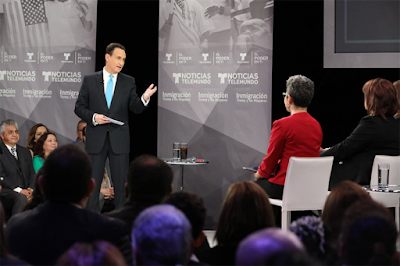 Noticias Telemundo announced today it will broadcast the town hall “Latinos Venciendo el Miedo” (Latinos Overcoming Fear), this Sunday, March 19 at 7PM/6 C.  Hosted by Noticias Telemundo anchor José Díaz-Balart, the special program will feature the participation of immigrants at the Church of the Immaculate Conception in Chicago who will voice their questions and concerns about the implementation of President Donald Trump’s immigration policy.  A group of expert panelists, including immigration lawyer and Noticias Telemundo contributor Alma Rosa Nieto and Father Manny Dorantes, will take questions from the audience and offer specific information on how to appropriately deal with the new policies. His eminence Blase J. Cupich, Cardinal and Archbishop of Chicago, will attend the event as a special guest. The town hall also will be available on Noticias Telemundo’s digital properties on YouTube, Facebook and Twitter, NoticiasTelemundo.com and the Noticias Telemundo mobile app.
“We will hear firsthand about the concerns and hopes of Latinos affected by the administration’s new policy on immigration, at a venue with enormous symbolic meaning,” said Díaz-Balart.  “We are living at a critical time that could redefine the role of the Hispanic community in our country, and it is important to fight fear and anxiety with reliable information such as the one Noticias Telemundo will offer at this town hall.”
Following “Inmigración, Trump y los Hispanos” (Immigration, Trump and the Hispanic Community), the most watched program on Spanish-language television on the day of its broadcast, the town hall “Latinos Venciendo el Miedo” will be Noticias Telemundo sixth news special produced after the election of President Donald Trump under the banner “Telling It Like It Is” (“Las Cosas Como Son” in Spanish).
In parallel to the news special, “El Poder en Ti,” Telemundo’s robust community initiative will continue to provide information, tools and resources via its new citizenship and immigration site.
Publicadas por Axel a la/s 4:54:00 p. m.