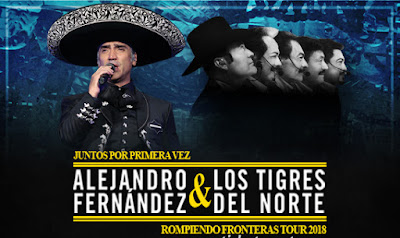 “Rompiendo Fronteras,” Fernández’s 15th studio album and first in four years, was certified platinum in its first week and it soared to the top of the charts, making it his sixth number one album. “Rompiendo Fronteras” blends his traditional ranchera sound from his earliest repertoire with Latin pop and reggaeton. The album produced hit singles including, “Se Que Te Duele,” “Quiero Que Vuelvas,” and the acclaimed collaboration with Los Tigres del Norte, “Para Sacarte De Mi Vida.”

Throughout Fernández’s career, he has collaborated with Christina Aguilera, Rod Stewart and his father, Vicente Fernandez. In 2005, due to Luciano Pavarotti falling ill, Plaìcido Domingo and Joseì Carreras of the Three Tenors invited Fernández to perform with them for the opening of the Forum Internacional de las Culturas, fulfilling a lifelong dream. Critics stated the performance by Domingo, Carreras and Fernández was as one of the most exciting and greatest vocal combinations ever performed. Fernández has sold over 30 million albums, won two Latin Grammy Awards, earned a star on the Hollywood Walk of Fame and was honored with the 2016 Billboard Hall of Fame Award.

Los Tigres del Norte, with many of their most popular songs, have been champions of the people. Their songs consist of tales or corridos about life, love, and the struggle to survive in an imperfect world. Born in Mexico and raised in San Jose, CA, they have released 51 albums since 1968 and turned nortenÞo (genre of Mexican music related to polka and corridos) music into an international genre. The band has won seven Grammy Awards, six Latin Grammy Awards, and was presented with a star on the Hollywood Walk of Fame. Los Tigres are politically active and socially conscious and received the Special Recognition Award at the 26th annual Gay and Lesbian Alliance Against Defamation (GLAAD) Media Awards in 2015, for their song, "Era Diferente.” On Billboard’s list of the 30 Most Influential Latin Artists of All Time, the band ranks number 15.