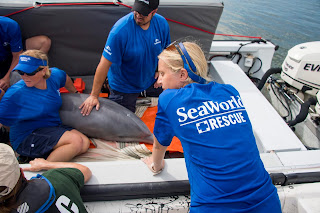 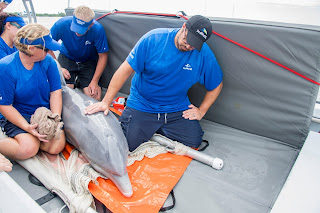 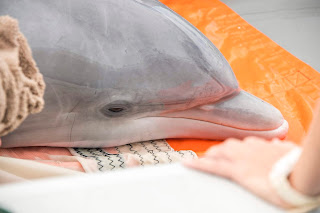 Members of the SeaWorld Orlando Rescue Team and the Georgia Aquarium Conservation Field Station, along with the Florida Fish and Wildlife Conservation Commission (FWC) returned “Sharkie” to the ocean near St. Augustine, Fla.

After an intense four month rehabilitation at SeaWorld Orlando.   The 265 lb. sub-adult Atlantic bottlenose dolphin was rescued in February on Ponte Vedra Beach, Fla. after FWC reached out for assistance due to the animal’s life-threatening injuries. Georgia Aquarium Conservation Field Station veterinarian, Dr. Rose Borkowski was on scene alongside FWC and conferred with NOAA Fisheries after assessing the animal and the decision was made to transport the animal to SeaWorld Orlando’s Cetacean Rehabilitation Facility.

The dolphin, which had sustained multiple shark bite wounds to her body and right pectoral flipper and was suffering from pneumonia, was successfully transported to SeaWorld Orlando where she has been receiving rehabilitation care for the past four months.

“Georgia Aquarium Conservation Field Station is proud to be a part of the initial rescue and release of this dolphin following its lengthy rehabilitation. Now, seeing it healthy enough to be released shows the dedication and hard work by all those involved,” said George Biedenbach, director of the Georgia Aquarium Conservation Field Station. “Our goal is to always assist animals in need as best we can, no matter the circumstances and we’re glad to see another animal thriving. Every animal counts and it’s through collaborative work like this that we can ensure the health and safety of so many ocean animals.”
"This is a very exciting day for us.  To see this animal  in the state she was in, bitten by sharks, emaciated, in trouble and with life threatening injuries, to as healthy as she is now to swim back out in the ocean,  it's just a wonderful day and that's why we do this," said Jon Peterson, Manager of SeaWorld Rescue Operations.
During her stay, SeaWorld veterinarians and the Animal Rescue Team provided 24-hour care to the dolphin, treating her with antibiotics, dewormers, anti-inflammatories, physical therapy and wound care.  Prior to her release, the dolphin was fitted with a satellite tag which will enable stranding network partner organizations to continue to monitor her.

The dolphin passed a major milestone in her journey to return when she passed a hearing test in April administered by NOAA Fisheries with the help of SeaWorld. The testing showed the dolphin has full hearing through the entire frequency range necessary for echolocation.  It is important for dolphins undergoing rehabilitation to pass a hearing test to ensure hearing loss was not a factor in their stranding. Hearing loss is detrimental to wild dolphins, as they rely on echolocation to hunt, navigate and avoid predators.

SeaWorld Orlando’s Animal Rescue Team is on call 24/7 to save and care for injured, orphaned or ill animals. In collaboration with NOAA Fisheries and other members of the Marine Mammal Stranding Network, SeaWorld Parks & Entertainment operates one of the world’s most respected programs authorized to rescue ill and injured marine animals, with the goal to rehabilitate and return them to the ocean. SeaWorld animal experts have helped more than 31,000 animals in need - ill, injured, orphaned and abandoned - for more than five decades.