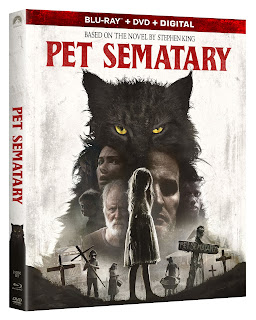 Based on the terrifying novel by Stephen King, and one of the scariest movies of the year,
PET SEMATARY, arrives on Blu-Ray Combo Pack this July 9.
Stephen King is known for being one of the most prolific writers in the horror and fantasy genres.

And here's why Pet Sematary is the creepiest King film to-date!

Reasons why Pet Sematary is one of the scariest Stephen King-inspired movies yet!

Stephen King is very well known for being a master of writing classic novels full of terror and suspense.
The story of Pet Sematary is no exception and the original book was published in 1983. Now, in the 2019
adaptation of the 1989’s frightening and campy movie, a few twists were made but the terror-filled
experience is still very present.

If you haven’t seen it yet, Pet Sematary tells the story of the Creed family, who relocates from Boston to
rural Maine, they soon discover an ancient burial ground hidden deep in the woods near their new
home. When tragedy strikes, the grief-stricken father is driven by the cemetery’s sinister power, setting
off a perilous chain of events that unleashes an unfathomable evil with horrific consequences.Pet
Sematary will be available on Blu-ray Combo Pack this July 9, but first, here are a few things you did not
know about this film that make it the scariest one yet.

The film is based on a real-life experience
Stephen King based this story on a real-life experience he had in the 70’s when he lived in Maine with
his family. They lived on the edge of the Maine woods next to a road where heavy, loaded trucks used to
drive through. The lives of many local pets were taken in various accidents, and local kids used to bury
them in a pet cemetery deep in the woods. King’s inspiration for his book, came after he found his
daughter’s cat tragically dead on the side of the road.

Stephen King references (Easter Eggs) can be seen throughout
It may result very interesting for Stephen King fans to watch this movie as it features and sneak peeks
various connections to a few of King’s horror novels like Cujo or It. These novels were also set in the
state of Maine, and during this film adaptation, we recommend you watch out for clues or easter eggs
about nearby towns of Derry and Castle Rock.

Creepy tagline
With no doubt, King’s Pet Sematary will be remembered as one of the most terrifying movies, and its
most famous line will stick with the audiences for years to come. The “sometimes, dead is better” quote
has terrified us since the book publication, through the first adaption and to this year’s film.

Experience this thrilling movie at the edge of your couch this upcoming July 9 available on 4K Ultra HD,
DVD, Blu-ray, and Digital everywhere. You’ll have a chance to enjoy watching exclusive bonus features
like an alternate ending, extra tales, deleted, and extended scenes!
Publicadas por Axel a la/s 8:52:00 p. m.