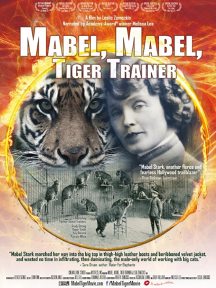 MABEL STARK WAS THE “TIGER QUEEN”
DESERVES HER DUE DURING WOMEN’S HISTORY MONTH
Written, Produced & Directed by Leslie Zemeckis -  Narration by Oscar ® winner Melissa Leo
Joe Exotic, the “Tiger King,” may have captured the nation’s attention with his menagerie of exotic animals and husbands but Mabel Stark captured the nation’s attention in the 30s as the first, female tiger trainer.  Mabel chose to train her tigers without the violence of the whip and chair, instead forming intimate relationships with her cats.  The documentary MABEL,MABEL TIGER TRAINER is currently streaming on Amazon, Vimeo, Itunes, Google Play, & Vudu

The best-selling author of Water for Elephants, Sara Gruen, says “At a time when people considered running away with the circus, Mabel Stark marched her way into the big top in thigh-high leather boots and beribboned velvet jacket, and wasted no time in infiltrating, then dominating, the male-only world of working with big cats. Stark watched and absorbed the current techniques--even if that meant she had to get married a couple of times--then amended what she'd learned to create her own method. Her secret? She applied positive reinforcement to tame tigers rather than train them through domination.”

This is the third documentary for Leslie Zemeckis who has investigated the circus culture in BEHIND THE BURLY Q, her first documentar about the true story of old-time burlesque. Her second film, BOUND BY FLESH is about vaudeville superstars Daisy and Violet Hilton, debuted on Netflix at #5. Her second book, Goddess of Love Incarnate, is the story of iconic burlesque stripper Lili St. Cyr.

“I came across Mabel Stark while researching burlesque; Mabel was a ‘cooch’ dancer before she became a tiger trainer,” says Zemeckis. “When she was told, ‘women can’t train the cats,’ she decided she’d find a way to do it. The longevity of her work and her commitment to her animals also intrigued me. I thought it was going to be a film about courage. It turned out to be about love. She loved her tigers, trusted them more than she did people.”
Mabel Stark first started working with tigers in 1916 and, over a 57-year career, she would handle up to 22 tigers at once. She doubled for Mae West during the big top scenes in I’M NO ANGEL (1933) and performed or provided animals for several other films of the era.

When the circuses divested from big cat acts in the 40s, Mabel toured in Europe and Japan before joining Jungleland, a wild animal theme park in Thousand Oaks, California, where she performed daily well into her 70s.

Synopsis: Raised in poverty in Kentucky, Mabel Stark joined the circus in 1911 and became the first woman to train tigers, earning the center ring despite being told that women couldn’t work the big cats. In a 57-year career, she headlined shows with Ringling Bros and Barnum & Bailey, survived multiple maulings and marriages, starred in Hollywood movies, and managed up to 20 cats by forming intimate relationships with each, rather than using the whip. Her life ended tragically just outside of Jungleland in Thousand Oaks, CA, and her legacy and the golden era of the American circus is recounted by former animal trailers, performers and historian Janet Davis, with Mabel’s voice, from her memoir “Hold That Tiger”, provided by Oscar®winner Melissa Leo.