According to Billboard Boxscore, as one of Latin music's best-selling artists, Balvin has grossed more than $20 million and sold over 300,000 tickets. The monumental "Jose" 24-track album includes the Grammy Award-nominated "Un Día (One Day)" and "Qué Más Pues?"—follows Balvin's 2020 "Colores," which peaked at number two on the Top Latin Albums chart and number 15 on the Billboard 200.

This year, the singer has been busy releasing a handful of singles, jumping on star-studded remixes and slowly returning to live shows. His live performances have primarily included festivals such as Baja Beach Fest in Mexico and Neon Experience in Las Vegas, an event curated by the artist himself featuring performers such as Karol G, Nio Garcia and Jowell & Randy.

Most recently, Balvin earned his 31st number one on Billboard's Latin Airplay chart thanks to the '90s dance hit-interpolated, Skrillex-assisted "In Da Getto," tying him with Enrique Iglesias for the most leaders in the chart's history.

Balvin is a nine-time finalist for this year's Billboard Latin Music Awards. He has garnered four nods for "Ritmo (Bad Boys for Life)," the megahit track with Black Eyed Peas, and is up for artist of the year.

Tickets: $51 - $171 (prices subject to change). All tickets are reserved. Ticket sales through Ticketmaster.com only (no box office sales). All dates, act(s) and ticket prices are subject to change without notice. Ticket delivery method is via mobile only 72 hours in advance of the show date. All tickets are subject to applicable taxes, service, handling and facility fee charges.  For Amway Center box office and ticket information, visit AmwayCenter.com (phone purchases are not available through the Amway Center box office).  The Amway Center is located at 400 West Church Street and the box office is located on the north side of the Amway Center, near the intersection of Church Street and Hughey Avenue. 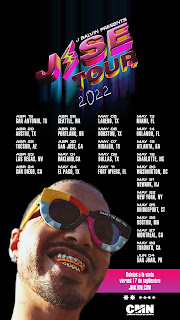