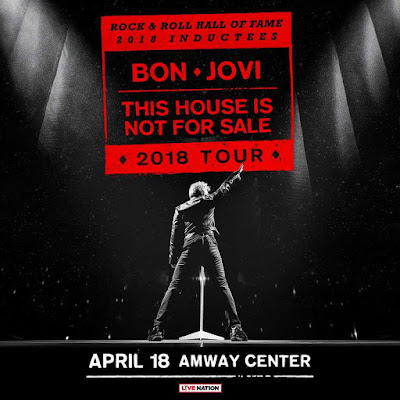 Global rock icons and newly announced Rock and Roll Hall of Fame 2018 inductees Bon Jovi, have announced the spring leg of theirThis House Is Not for Sale Tour, presented by Live Nation. The tour kicks off in Denver, CO on March 14 and concludes May 14 in Washington, DC. The Grammy®-winning band will also celebrate their return to the road with the re-release of “This House Is Not For Sale,” as a new version, containing two brand new songs, “When We Were Us” and “Walls,” available via all download and streaming partners on February 23. Bon Jovi returns to Orlando’s Amway Center on Wednesday, April 18.

The This House Is Not For Sale Tour has already received fan and critical acclaim, with its first North American leg grossing an estimated $47 million and its South American leg grossing nearly $40 million. Atlanta Journal-Constitution raved, “(The tour) solidifies their standing as one of rock’s most resilient acts.” Creative Loafing Tampa said, “Bon Jovi leaves 18,000 screaming, standing fans shot through the heart…” while the Los Angeles Daily News reported, “JBJ shook the stage from the start to end with energy and enthusiasm, and he kept that energy rolling with a voice in tip-top shape…” The St. Louis Post-Dispatch said, “Bon Jovi doesn't miss a beat..." and the Toronto Sun enthused, “It was anthemic Bon Jovi at its best.”

The This House Is Not for Sale Tour was Bon Jovi’s first outing since the band’s 2013 Because We Can World Tour. The 2013 tour was their fourth in six years to be ranked the number one top-grossing tour in the world (a feat previously accomplished by only The Rolling Stones) with a total of $259.5 million. Bon Jovi also earned the number one grossing worldwide tour in 2010 for The Circle Tour, with $201 million total, and 2008’s Lost Highway Tour, which earned $210.6 million. Bon Jovi’s touring legacy was recognized with the “Legend of Live” award at the Billboard Touring Conference & Awards prior to the kick-off of the This House Is Not for Sale Tour.

Bon Jovi released “This House Is Not for Sale” (Island Records) on November 4, 2016, which debuted atop the Billboard 200 chart, giving the rock band its sixth U.S. number one album. Worldwide, the album hit number one in Australia and Austria; number two in Spain and Switzerland; number three in Canada and Germany; and hit the top 10 in Belgium, the Netherlands, Ireland, Italy, Portugal, Scotland and the United Kingdom. “This House Is Not for Sale” was Bon Jovi’s first major release since, “What About Now” (2013), the band’s third consecutive multi-platinum album to debut at number one on the Billboard Top 200 (“Lost Highway” in 2007, and “The Circle” in 2009).

Over an illustrious career spanning more than three decades since their formation in 1983, Bon Jovi has earned their place among global rock royalty. With over 130 million albums sold worldwide, an extensive catalog of hit anthems, more than 2,800 concerts performed in 50 countries for more than 35 million fans, and ticket sales grosses well over $1 billion in around the world in just the past decade, Bon Jovi is the consummate rock and roll band.

Bon Jovi will be inducted into the Rock and Roll Hall of Fame this April.