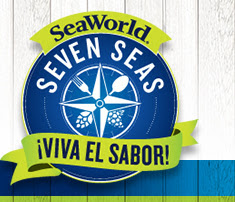 SeaWorld’s Seven Seas Food Festival begins at select markets around the park at 11:00 a.m. with all locations in full operation by 12:00 p.m. every Saturday and Sunday through April 29.

Like all special events at SeaWorld, the Seven Seas Food Festival is included with park admission – including the festival’s concerts and performances at Bayside Stadium.