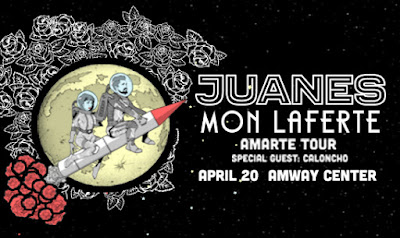 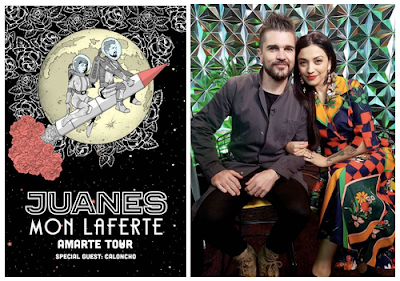 Likewise, Mon Laferte has quickly become one of Latin music’s most captivating young performers. She is currently regarded as one of the most highly-acclaimed artists in the Latin American alternative scene. But the truth is that Mon Laferte is much more than a figure that can be placed in a specific niche.

With her incredible voice… [she] explores different rhythms and styles to bring diversity to truly personal and deeply emotional songs.” ~ Hoy

“Mon Laferte’s dramatic appeal is irresistible, [with] references to vintage pin-ups and rockabilly, coupled with a soaring vocal range.” ~ Remezcla

Juanes’ critically-praised, and chart-topping, “Mis Planes Son Amarte,” (Latin music’s first major visual album) received two new awards this year, increasing the Colombian superstar’s career tally to a staggering 25 combined Grammy & Latin Grammy awards. With a rare five-star Rolling Stone review and pick as “one of the best albums of 2017,” “Mis Planes Son Amarte” also recently earned a 2018 Grammy nomination for Best Latin Pop Album. Hailed by Time magazine as “one of the 100 most-influential people in the world,” and The New York Times described him as, “Latin America's soulful poet,” Juanes has built a distinctive sound that fuses his love of rock and pop, with multi-layered songwriting, and a deep reverence for the traditional folk and other indigenous rhythms of the continent. With eight multi-platinum albums to his credit, Juanes has earned 11 number one Billboard singles, and holds multiple chart records. He is also one of Latin music’s leading social media voices and a dedicated global activist, with wide-ranging charitable efforts.

Mexico City-based, Chilean singer-songwriter, Mon Laferte, is one of the rising stars of the Latin music world. Following the release of her new album, “La Trenza.” MTV named Mon Laferte as this year’s Best Artist In Mexico, while NPR, All Music, The New York Times and more have also applauded the album. Most recently, “La Trenza,” received an impressive five Latin Grammy nominations, with Mon Laferte taking home the award for BestAlternative Song — recognizing “Amárrame,” her hit duet with new tour partner, Juanes.

Tickets: $36.95, $56.95, $76.95, $96.95 & $126.95 (prices subject to change). Buy tickets at amwaycenter.com, Chase Box Office at Amway Center, Ticketmaster retail locations, charge-by-phone at 800.745.3000 or at Ticketmaster.com. Limited on-ice seating is available upon request. Group discounts are available for parties of 10 or more.  All dates, act(s) and ticket prices are subject to change without notice.  All tickets are subject to applicable taxes, service, handling and facility fee charges.  For Amway Center box office and ticket information, visit amwaycenter.com (phone purchases are not available through the Amway Center box office).  The Amway Center is located at 400 West Church Street and the box office is located on the north side of the Amway Center, near the intersection of Church Street and Hughey Avenue.
Publicadas por Axel a la/s 8:14:00 a. m.