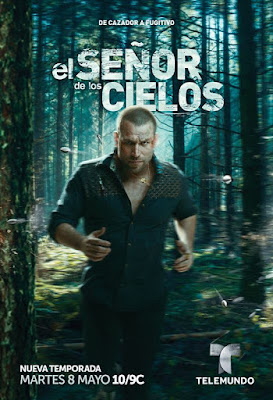 Shot Partly in Istanbul, Turkey, With a Production Crew of More than 300, and a Star-studded New Cast, This Season is the Largest Ever For the Emmy Award-winning Super Series™ That Has Ranked #1 on Spanish-language Television
This Season Features the Return of Robinson Díaz (El Cabo), and New Cast Members Including Maria Conchita Alonso, Juana Arias, Carlos Bardem, Isabella Castillo, Ninel Conde, Guy Ecker, Alberto Guerra, Thali García, Dayana Garroz, Francisco Gattorno, and Fernando Noriega, among others.

The chase begins and this time they want “Aurelio Casillas” alive or dead in a new season of Telemundo’s highly-rated “El Señor de los Cielos” beginning Tuesday, May 8 at 10pm/9c. With more than 300 crew members, shot in Mexico and Istanbul, Turkey, and a star-studded cast, this season is the most ambitious ever for the Super Series™ that has ranked #1 in Spanish-language television.
Although “Aurelio Casillas” (Rafael Amaya) has shown his skills as an extraordinary hunter, in this new season he understands that in order to avoid becoming a victim of his victims, he must become a fugitive, especially from the fearsome Colombian capo “El Cabo” (Robinson Díaz) who comes for revenge at any cost, for the death of his son.
Starring award-winning Mexican actor Rafael Amaya, the new season of “El Señor de los Cielos” features an amazing new cast including:
The Super Series ™, which in 2014 won the first International Emmy award in the category of Best Foreign Language Program in Primetime in the U.S., also features the return of popular actors Ivan Arana, Carmen Aub, Alejandro Lopez, Jesús Moré, Lisa Owen, and Miguel Varoni, among others.
“El Señor de Los Cielos” is a Telemundo Global Studios original production, recorded in Mexico by Argos Television, written by Luis Zelkowicz and directed by Carlos Villegas, Miguel Varoni, and Moisés Urquidez, under the executive production of Mariana Iskandarani.
Viewers and fans of the series can follow the latest news via facebook.com/srdeloscielostv and through Instagram @elsenordeloscielos. Connect with Telemundo through @facebook, follow us on @twitter and visit us through telemundo.com and youtube.com.
Publicadas por Axel a la/s 8:09:00 a. m.