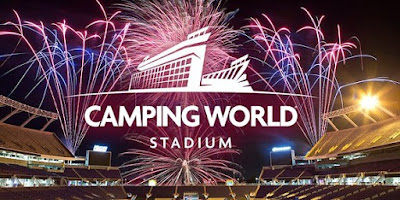 Orlando’s Camping World Stadium took it to the limit on Saturday night as the Eagles, along with Jimmy Buffett & the Coral Reefer Band, captivated a capacity crowd of 45,000+ patrons while becoming the highest-grossing concert in the stadium’s 82-year history, placing it just ahead of other recent big-draw concerts including the Rolling Stones, Guns N’ Roses and Metallica.

Over four and a half hours, Eagles and Jimmy Buffett delivered hit-filled sets to adoring fans that sang along from the floor and throughout the stands. The two bands had not played on the same Orlando bill together since Rock Super Bowl II on July 3, 1977 when the stadium was named the Tangerine Bowl.

Since reopening in late 2014 following its $207.7 million reconstruction, Camping World Stadium has established itself as a must-play venue and continues to garner the attention of the biggest touring artists. Later this year, the stadium will host yet another high-profile concert when Beyoncé and Jay-Z, hip-hop and R&B’s reigning power couple, bring their On The Run Tour II (OTR II) to Central Florida on Wednesday, August 29.

“Saturday night’s sold-out show was a spectacular experience for our patrons and notable because very few cities were chosen to host this marquee double-billing in a stadium setting,” said Chief Venues Officer Allen Johnson. “Not only is Camping World Stadium riding a wave of successful concerts, we continue to see great returns on our reconstruction investment by welcoming huge sporting events including the NFL Pro Bowl (2017 & 2018), WrestleMania 33 and Copa America Centenario, among many others.”

Now recognized as a top sports and entertainment destination, the stadium complex has plenty of diverse programming scheduled for the remainder of 2018. Drum Corp International (DCI) marches into Camping World Stadium on July 8 while the Vans Warped Tour makes its final run this summer with a stop at Orlando’s Tinker Field on August 3. The Camping World Kickoff returns on September 1 featuring a season-opening college football match-up between the Alabama Crimson Tide and the Louisville Cardinals. Electric Daisy Carnival (EDC) makes its eighth appearance at Tinker Field on November 9 & 10. The historic Florida Classic returns on November 17 continuing its run of over two decades at the stadium. A few weeks later, the Florida High School Athletic Association’s Football State Championships returns December 6-8 with eight division title games. Finally, Camping World Stadium closes out the year by welcoming back the AutoNation Cure Bowl, the Camping World Bowl and the Citrus Bowl. With these college bowls, the stadium continues its distinction as the only facility in North America to host three bowl games annually.