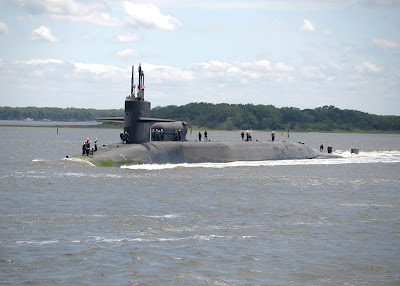 Capt. Seth Burton was relieved by Capt. Theron Davis as commanding officer of Florida (Gold).
“I am extremely proud of the professional men and women who bring life to Florida, a national security treasure," said Burton to the crew.

"The life we live as submariners and citizen-Sailors is hard one, but a truly honorable one. The culture of trust and honor you have established in the Florida Gold family will help sustain you through the unknown challenges ahead. I sincerely thank you for your quiet and sacrificial service.”
Burton assumed command of Florida’s Gold Crew in October 2018. Under his command, the ship was awarded the 2019 Commander, Submarine Squadron 16 Battle Efficiency “E” award and completed a 27-month forward deployment, the longest in Atlantic Fleet history.

“I feel truly privileged to have had the opportunity to serve as the commanding officer of this incredible group of Navy professionals and their mighty warship," said Burton. “Their persistent performance and dedication to duty, day in and day out, to achieve the seemingly unachievable, is a testament to today’s youth and their willingness to work together for a higher purpose.”

“Danete, you are the epitome of a selfless servant,” said Burton. “Without you teaching our boys the importance of duty and sacrifice, and teaching them to embrace this calling, I would not have had this incredible opportunity to serve our citizenry alongside these young patriots. Thank you and the boys for sacrificing so much over the years in service to your country.

He contributes his success to his wife, Jodie, and his children, Randahl and Zachary.
“Capt. Burton, thank you for a smooth turnover and the development of an outstanding crew,” said Davis. “To the officers and crew of Florida Gold Crew, I look forward to working with each and every one of you.”

Florida is the first submarine and the sixth United States Navy ship to bear the name of the state. It was the second submarine to complete the conversion from a ballistic-missile submarine to a guided-missile submarine.
Burton will now serve as Chief of Staff for the Director, Strategic Systems Programs, Washington, D.C.
Naval Submarine Base Kings Bay is homeport to all East Coast Ohio-class submarines.

Get more information about the Navy from U.S. Navy Facebook or Twitter.
For more news from Commander, Submarine Group 10, visit www.navy.mil/local/csg10/.
Publicadas por Axel a la/s 11:21:00 a. m.