Award-winning documentary MY NAME IS PEDRO now in select theatres. 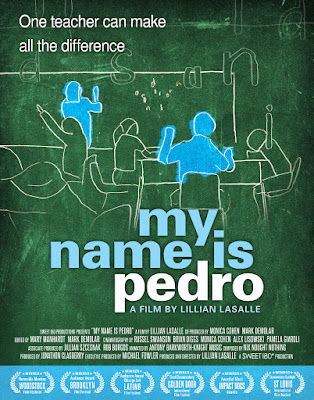 MY NAME IS PEDRO

Releasing in Virtual Theaters in New York (The Maysles Cinema) September 17 and Los Angeles (Laemmle) on October 2 with major cities to follow.

***Viewing links are available by request to consider coverage of  MY NAME IS PEDRO by request to: emma@eg-pr.com***

*** Filmmaker Lillian LaSalle is available for interview by request to this email.***

First time director, Lillian LaSalle's award-winning, powerful documentary, MY NAME IS PEDRO, explores what public education meant to South Bronx Latino maverick educator, Pedro Santana, and what he, in turn, meant to public education. The film is also especially timely in this moment of national reckoning since the murder of George Floyd, subsequent protests and high attention being paid to public school parity.

Infectious in his optimism, Santana becomes one of the most influential public-school teachers and then administrators in the New York public school system after turning his troubled Bronx middle school, MS 391, around. He is unapologetic in his commitment to create change for kids, no matter the odds. When a glowing front-page New York Times article catapults him into the spotlight, he is recruited and then accepts a promotion to use his famed 'out of the box' and transformative practices to save a corrupt and divided suburban school district. But the political challenges there may simply be too great, even for the infallible Santana.

In order to continue his life's mission that 'every kid can learn', (he himself was labeled 'special ed' as a child), he realizes that he must venture beyond not only the restrictive 'four walls' of the public education system, but also his own neighborhood, city and even his own country.

MY NAME IS PEDRO is a profound story of how one person actualizes learning and positive change in children, adults, environments and communities through an 'impact' ripple effect strategy that he has effortlessly perfected. The film is also an essential and timely reminder of the importance of great educators that exist within the infrastructure of our country's public education system.

LaSalle is the recipient of the 2016 Peabody "Futures of Media” Award for Producing the web-series, Halal In The Family, starring Aasif Mandvi, which garnered wide-spread media attention for taking on Islamophobia through the use of comedy and parody.

LaSalle is best known for her work as a talent manager representing actors, writers and directors as President of Sweet 180. https://www.mynameispedro.com .

LaSalle is the Producer of several feature films including, Loggerheads, which premiered in competition at The Sundance Film Festival and Sweet Land, which won the Independent Spirit Award for Best First Feature for writer/director, Ali Selim. LaSalle’s other notable feature Producing credits include: Today's Special, which premiered at the BFI London Film Festival and won the audience award at the Palm Springs Film Festival, Just Like the Son from director Morgan Freeman, Find Love, Heavy Petting, and Mentor, as well as Southern Belles and American Cannibal: The Road to Reality.

MY NAME IS PEDRO- Connect on Social Media: