Christmas in Carolina’ will premiere on Roku (AVOD), November 1, 2020 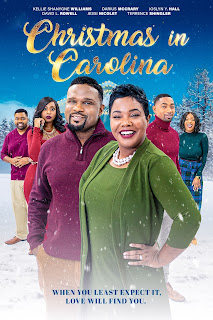 Christmas in Carolina’ will premiere on Roku (AVOD), November 1, 2020, with the concurrent release (11/01/20) across VOD transactional platforms.
Lensed on location in South Carolina, the film was directed by Peggy Williams working from a script by Stacie Davis, and stars Joslyn Y. Hall (Atlanta) and David L. Rowell (Com-pli-cat-ed) alongside Kellie Shanygne Williams and Darius McCrary of Family Matters.
The Legacy Distribution holiday romance will release On-Demand and On-Digital on November 1st, 2020.

Joslyn Y. Hall
Bio-“ Professionally trained, Joslyn Y. Hall has always been bound to the arts but truly caught the acting bug her junior year of high school where she took theater classes at Harding University High School. There, she realized acting was her calling. From then on out she has put forth every effort to perfect her craft by taking acting classes and consistently staying in front of a camera, staying on stage or even behind the camera where she has worked behind the scenes and has assisted with castings for productions, co-written her own television series as well as producing social media content. She has performed in several plays during her tenure at The University of North Carolina at Greensboro, where she received her Bachelor of Arts degree in Communication Studies with a minor in Radio. She has won awards for her outstanding performances in multiple acting showcases which have led to her being able to leave the country and participate in acting showcases overseas."
David L. Rowell
Bio- DAVID L. ROWELL, a South Carolina native grew up believing that his calling was in basketball, the sport he loved more than anything else; however, after an internship opportunity, DJ, as he is affectionately known, caught a glimpse of artistry. This is where David tapped into acting and his charismatic personality instantly catapulted him into a new arena. David has since put forth all the necessary efforts to perfect his craft by staying consistent with training and being in front of any camera that allows him to display his platforms. He has quickly become acclimated to life on the scene as well as behind the scene.
David’s captivating personality helped him land his first, big role in the feature film “Christmas in Carolina,” where he personifies the character “Wesley Saxon.” David, who is the founder of The DJ Rowell Foundation, is pursuing his acting career full time and is extremely humbled for the opportunities he’s had as well as those yet to come.
Christmas in Carolina,  available in time for the holidays on November 1
Film Bio- After losing her parents in a car accident, Elle (Joslyn Y. Hall), a career-driven investment banker, has given up on love and Christmas until she meets Wesley (David L. Rowell), a former NBA player and CEO of a small marketing firm. Impetuously, Wesley invites Elle home for Christmas in South Carolina with his family. With hesitation, Elle accepts and gets a much bigger present than she could ever have imagined!
-Shot on location in South Carolina
- Stars "Family Matters" stars Kellie Shangyne Williams and Darius McCrary who play siblings once again
Publicadas por Axel a la/s 1:46:00 p. m.