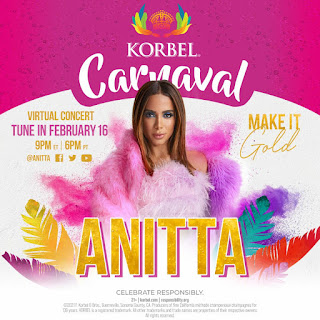 Korbel California Champagne and global pop superstar Anitta have partnered to provide a Carnaval experience like no other. On February 16th at 9pm ET/6pm PT Anitta will perform a virtual concert viewable on her YouTube, Facebook and Twitter to bring the Carnaval spirit to life in viewers’ living rooms.

Carnaval, a joyous and energetic occasion throughout Latin America, toasts the arrival of spring between February and March. Carnaval festivities celebrate life and culture with parades and street parties featuring music, dance, food and elaborate costumes and masks.

As a consistent headliner at Rio Carnival and Brazil native, the authenticity Anitta brings to Korbel Carnaval and the U.S. Latino community is unrivaled. Anitta has been named among the world’s 15 most influential musicians on social media by Billboard. Her first trilingual album was released in 2019 with songs in Spanish, Portuguese, and English, and she is currently putting the finishing touches on her much-anticipated 2021 album.  Anitta will be performing her hottest songs at the Korbel Carnaval virtual concert including her latest singles “Me Gusta” feat. Cardi B & Myke Towers and “Loco.”

“I am thrilled to be working with Korbel to bring this festive celebration of Latin American culture to life through a virtual concert,” said Anitta. “Carnaval normally only has one rule - and that is to have fun - so we hope you will tune in from wherever you are in the world for an unforgettable performance!”

Create your own Carnaval right at home by inviting a few friends over, turning on the Korbel Carnaval virtual concert, and enjoying the shift to warmer weather with a KORBEL Sweet Heat cocktail!

ABOUT KORBEL:
Established in 1882 in Sonoma County’s Russian River Valley, Korbel Champagne Cellars produces the United States’ most popular méthode champenoise champagne. The true measure of Korbel’s success during its 138 years can be seen in the impact it has had on American consumers and its presence at various celebrations throughout the years. Owned and managed by the Heck family since 1954, Korbel currently makes eleven California champagnes and a limited amount of still wine. In a separate facility, Korbel also produces one of the country’s most respected brandies.

ABOUT ANITTA:
Since breaking through in Brazil six years ago, Anitta has become the leading artist of a new generation of Latin American music. As the biggest ever global female popstar to come from Brazil, she has amassed 51 million Instagram followers and over 15 million YouTube subscribers garnering more than 5.2 billion views. Anitta has been named among the world’s 15th most influential musicians on social media by Billboard. In July 2013, she released her self-titled first album, Anitta, which consisted of 14 new tracks, most of which were written by her. Anitta’s second album, Ritmo Perfeito, was released in July 2014, followed by her third album, Bang, in 2016. The album contained 15 original tracks and the music video for the album’s title song, “Bang,” has garnered over 404 million views since its release. Her latest album, Kisses, was released in April 2019 and marks Anitta’s first trilingual album with songs in Spanish, Portuguese, and English. Kisses was nominated for “Best Urban Album'' at the 2019 Latin GRAMMY® Awards. Since 2014, Anitta has been named “Best Brazilian Act” at the MTV Europe Music Awards for five consecutive years. She was a highlight of the 2016 Rio Olympic Games’ Opening Ceremony, where she performed alongside Brazilian singer/songwriters Gilberto Gil and Caetano Veloso. Anitta has graced the covers of countless magazines including Vogue Brazil, Marie Claire Brazil, GQ Mexico, and GQ Brazil. Anitta has worked with the likes of Madonna, Major Lazer, J Balvin, Diplo, Ozuna, and Maluma among others. Most recently she released “Tócame” feat. Arcangel & De La Ghetto,” “Fuego” with DJ Snake and Sean Paul, and “Me Gusta” feat. Cardi B & Myke Towers. Anitta is currently in the studio recording her fifth album, which will be in English, Spanish, and Portuguese on Warner Records.