Debuting this Summer as a Hulu Original in the U.S., Star+ in Latin America and

Disney+ Under the Star Banner in all Other Territories 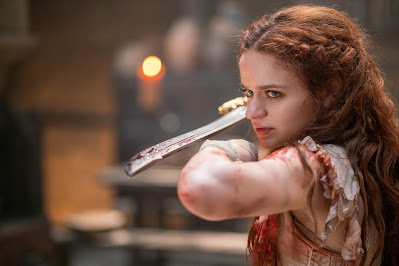 BURBANK, Calif. (April 12, 2022) — “The Princess,” an original movie from 20th Century Studios, will stream July 1, 2022, exclusively on Disney’s direct-to-consumer platforms:  on Hulu in the U.S., Star+ in Latin America and Disney+ under the Star banner in all other territories. An action-packed fight to the death set in a fairy tale world, “The Princess” is directed by Le-Van Kiet (“Furie”) and stars Emmy Award® nominee Joey King (“The Act,” “The Kissing Booth”) as the skilled and formidable young royal.

When a beautiful, strong-willed princess refuses to wed the cruel sociopath to whom she is betrothed, she is kidnapped and locked in a remote tower of her father’s castle. With her scorned, vindictive suitor intent on taking her father’s throne, the princess must protect her family and save the kingdom. The film stars Joey King, Dominic Cooper (“Preacher”), Olga Kurylenko (“Black Widow”) and Veronica Ngo (“The Old Guard”). “The Princess” is directed by Le-Van Kiet, written by Ben Lustig (“The Thirst”) & Jake Thornton (“Final Fantasy”) and produced by Neal H. Moritz (the “Fast and Furious” franchise), Toby Jaffe (“Total Recall”) and Derek Kolstad (“John Wick”), with Joey King and Guy Riedel serving as executive producers.

20th Century Studios is an Academy Award®-winning producer of feature films for both theatrical and streaming release. It is home to such iconic  franchises as “Avatar,” “Alien,” “Planet of the Apes,” “Predator,” “Die Hard,” and “Kingsman” and creator of hit films including “Bohemian Rhapsody,” “The Greatest Showman,” “The Martian,” and “Ford v Ferrari” and “Free Guy.” It also launched the successful “Deadpool” and “X-Men” film series. Among the studio’s current releases are “The King’s Man,” “Death on the Nile,” the Oscar®-winning “West Side Story,” and the upcoming “Avatar” sequels. Previously known as 20th Century Fox prior to becoming a part of The Walt Disney Company, 20th Century Studios is recognized for its incredible 80-year legacy. It is the studio that brought the first six “Star Wars” films, in addition to standouts from across the decades, including “Miracle on 34th Street,” “All About Eve,” “The King and I,” “The Sound of Music,” “Butch Cassidy and the Sundance Kid,” “The Princess Bride,” “The Abyss,” “Edward Scissorhands,” “Home Alone,” “My Cousin Vinny,” “Speed,” “Cast Away,” “Moulin Rouge!,” “Minority Report,” “Gone Girl,” and “The Revenant.”

Hulu is the leading and most comprehensive all-in-one premium streaming service that offers an expansive slate of live and on-demand entertainment, both in and outside the home, through a wide array of subscription options that give consumers ultimate control over their viewing experience. As part of Disney’s Media and Entertainment Distribution segment, Hulu is the only on-demand offering that provides access to shows from every major U.S. broadcast network, libraries of hit TV series and films – including licensed content available exclusively on Hulu – and award-winning Hulu Originals, both with and without commercials. With Hulu + Live TV, subscribers receive a unique combination of access to 80+ live news, entertainment and sports TV channels from 20th Television, The Walt Disney Company, ABC, NBCUniversal, CBS Corporation, The CW, Turner Networks, A+E Networks and Discovery Networks, as well as Disney+ and ESPN+ included as part of the base plan. Visit hulu.comto subscribe or learn more about the service.

Disney+ is the dedicated streaming home for movies and shows from Disney, Pixar, Marvel, Star Wars, and National Geographic, along with The Simpsons and much more. In select international markets, it also includes the new general entertainment content brand, Star. The flagship direct-to-consumer streaming service from The Walt Disney Company, Disney+ is part of the Disney Media & Entertainment Distribution segment. The service offers commercial-free streaming alongside an ever-growing collection of exclusive originals, including feature-length films, documentaries, live-action and animated series, and short-form content. With unprecedented access to Disney’s long history of incredible film and television entertainment, Disney+ is also the exclusive streaming home for the newest releases from The Walt Disney Studios. And through Star, it offers the latest from 20th Century Studios, Disney Television Studios, FX, Searchlight Pictures, and more. For more, visit disneyplus.com, or find the Disney+ app on most mobile and connected TV devices.