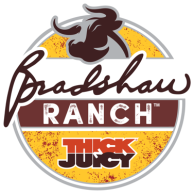 Terry Bradshaw Fires Up the Grill for

are now available in more than 5,000 retail stores nationwide

Thackerville, Okla. – April 25, 2022 – Just in time for National Burger Month in May, NFL legend and iconic entertainer, Terry Bradshaw, has announced that his Bradshaw Ranch Thick N Juicy™ burgers are now available in more than 5,000 retail store locations throughout the nation. The burgers debuted last year.

“These patties are the perfect addition to your cookout or barbeque,” Bradshaw said.

Bradshaw Ranch Thick N Juicy burgers are made with award-winning angus beef, available in one-third and quarter-pound patties. They come in two flavors made for burger lovers: cheddar cheese and bacon; and cheddar cheese, garlic and butter.

The burger blends have been crafted by Bradshaw and his son-in-law, acclaimed chef, Noah Hester, who can be seen on the family’s hit E! show, “The Bradshaw Bunch.” The Bradshaw family gathers regularly for backyard barbecues and Bradshaw Ranch Thick N Juicy™ were inspired by the families love of great burgers.

The only NFL player with a star on the Hollywood Walk of Fame, Terry Bradshaw continues to entertain fans far and beyond his legendary professional football career with the Pittsburgh Steelers. The four-time Super Bowl champion quarterback, two-time Super Bowl MVP and Pro Football Hall of Fame inductee joined “FOX NFL Sunday” as co-host and analyst with the show’s inception in 1994. In addition to his long-term role as a multi-Emmy and award-winning broadcaster, Bradshaw has starred in movie and television hits including the box office smash comedy romance, “Failure to Launch,” “Father Figures,” “Better Late than Never,” and “The Masked Singer.” Bradshaw is also a gospel and country singer, motivational speaker, New York Times best-selling author and breeder of championship quarter horses. In addition to starring in his own stage production, “The Terry Bradshaw Show,” the iconic football star and entertainer also stars along with his family in E!’s new hit show, “The Bradshaw Bunch,” which follows the adventures of his family.