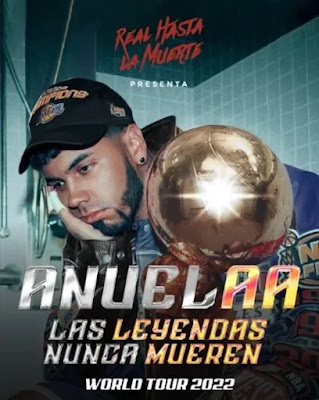 Regarded as an avant-garde of Latin trap music, Anuel AA has collaborated with the biggest names in Latin music and beyond, including Marc Anthony, Bad Bunny, Enrique Iglesias, Tego Calderon, Karol G, Lil Wayne, Ozuna, Farruko and Yandel. At the end of 2019, he wrapped his hugely successful Emmanuel European Tour shortly before the pandemic arrived. In November 2021, Anuel AA released his third studio album, "Las Leyendas Nunca Meuren," created over eight months during the pandemic. The album is a conceptual series that expresses his love for the legends who inspired him while forging a bridge between hip-hop, trap and reggaeton. The album debuted atop Billboard's Top Latin Albums chart, earning him his fourth consecutive number one album. Now, the Latin trap artist is ready to return to the big stage, embarking on the most ambitious tour of his career.

CMN is the authority in Latin entertainment. As a multicultural creative agency, our common goal is to create and build unique experiences between fans, artists and brands. Henry Cárdenas, entrepreneur, philanthropist and founder of CMN, has been pioneer in bringing Latin entertainment and sports to the United States. The Chicago-based company has more than 100 full-time professionals constantly creating cutting-edge marketing experiences and producing the best events in the country.  To learn more about CMN and its roster of artists, visit www.cmnevents.com or follow us at @cmnevents.