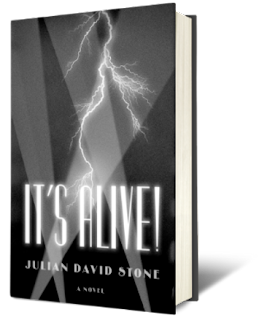 It's Alive! by Julian David Stone which comes out in May and chronicles behind-the-scenes details of the movie that put classic Universal Studios monsters on the map.

Thrill to this story of the filming and production of the 1931 Frankenstein movie inspired by true events. The film that set off the frenzy around Universal Pictures classic monster movies was riddled with on-set and behind-the-scenes drama and intrigue lovingly fictionalized by award-winning writer Julian David Stone. Family drama, Hollywood politics and professional rivalries animate It’s Alive! [May 17, 2022, Greenleaf Book Group].

Fans of Old-Hollywood historical fiction and cult-classic horror movies in the vein of Frankenstein alike will get absorbed in this compelling novel that moves along at a breathless cinematic pace through events that will not only change the lives of everyone involved, but Hollywood itself.

Julian David Stone is the author of the award-winning novel: The Strange Birth, Short life, and Sudden Death of Justice Girl, which is about the world of the 1950s live television. It is currently being turned into a TV series. Julian is also the author of the best-selling coffee table book, No Cameras Allowed: My Career As An Outlaw Rock & Roll Photographer, detailing in words and photos his wild adventures photographing rock and roll concerts in the 1980s. Stone grew up in the San Francisco Bay Area, eventually relocating to Los Angeles to study filmmaking and then enter the entertainment business. His previous work include screenplays for Disney, Paramount, Sony, and MGM; the full-length play, The Elvis Test; and several short-form documentaries on Frank Sinatra for Warner Bros. He is also the writer and director of the hit cult comedy feature film, Follow the Bitch, which has played to packed houses all around the country and received numerous awards.