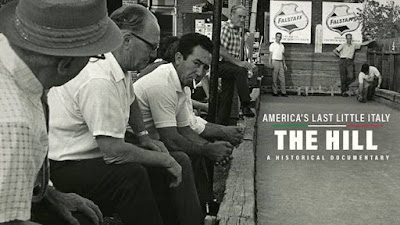 America's Last Little Italy: The Hill Continues to Inspire Via PBS and Amazon

America's Last Little Italy: The Hill, the award-winning documentary about St. Louis’ venerable Italian neighborhood continues to introduce viewers across the country to the world of The Hill.

The film debuted this past summer as part of the St. Louis Filmmakers Showcase where it was an unprecedented success, breaking ticket sales and viewer records. The documentary tells the story of The Hill, the St. Louis Italian-American neighborhood founded by Italian immigrants in the late 1800s. Much larger than other Little Italys, The Hill encompasses some 52 square-blocks. While the most popular Little Italys across America have lost their ethnic identity, The Hill remains an actual Italian neighborhood, not just one street of tourist attraction restaurants and shops.

“In calling the documentary, America's Last Little Italy: The Hill, we prepared for some push back - but time and time again, people were thrilled to learn that a neighborhood like The Hill still exists,” said director/producer Joseph Puleo. "We have a feeling that when people actually sit down and watch the film, in the end, they will agree. The Hill truly is America's Last Little Italy."

During the festival run, the film was watched by people in many different Italian communities - including New York, New Haven, Chicago, and Little Rock. “Many commented how they couldn't wait for Covid to be over so they could come and visit The Hill in St. Louis and see what it’s all about,” explains Puleo.

America's Last Little Italy: The Hill followed up its festival run with a November 30th TV premiere on Nine Network PBS. The film, featured as part of the station’s December Membership Drive, was their most-watched and subsequently most successful program. While Puleo considers interest from other PBS markets, his documentary is currently available on DVD, where it has already achieved sales of 3,500+ and is streaming for rent or purchase via Amazon Prime Video.