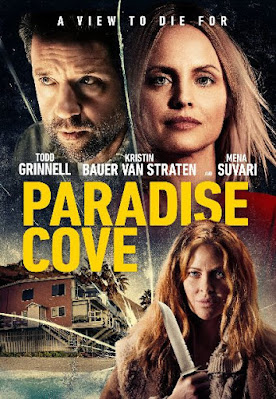 ON DEMAND
Feb 12, 2021
This February, BAFTA Nominee Mena Suvari faces danger at Paradise Cove.Todd Grinnell (“One Day at a Time”) and Kristin Bauer van Straten (“True Blood”) also star in the  Martin Guigui-directed thriller, the story of a contractor and his wife who move to Malibu to flip his mother's beach house and are terrorized by the deranged homeless lady living under the house.
Written and executive produced by Sherry Klein, and directed by award-winning filmmaker Martin Guigui (Beneath the Darkness, The Bronx Bull), Paradise Cove premieres on digital Feb 12 from Quiver Distribution.
Kristin Bauer van StratenIn 1995, van Straten had her first regular role in a television series, as Maggie Reynolds on The Crew. Other recurring roles include Geneva Renault in Total Security, Candy Cooper in That's Life, Rebecca Colfax in Dirty Sexy Money, and Belinda Slypich in Hidden Hills. Perhaps her best known film role was in Dancing at the Blue Iguana in 2000. Van Straten played a porn star appearing as the featured act at a Los Angeles strip club and performed an extended nude dance. In 2001, she starred in the award-winning short film Room 302, and in 2004 she had a minor role in the film 50 First Dates, which starred Adam Sandler. In the animated series Justice League, she supplied the voice of the superhero Mera.She has also made a number of guest appearances in several television shows, including LA Law, Seinfeld, Everybody Loves Raymond, Dark Angel, Two and a Half Men, Star Trek: Enterprise, CSI: Crime Scene Investigation, Desperate Housewives, and George Lopez. She famously appeared in a Seinfeld episode (The Bizarro Jerry) as Gillian, Jerry's girlfriend with "man hands", though the actual "man hands", seen only in close-ups, belonged to a member of the production crew.From 2008 to its conclusion in 2014, van Straten played the vampire Pamela Swynford De Beaufort on the HBO fantasy drama series True Blood.On December 8, 2009, TV Guide confirmed she had been promoted from recurring status to a series regular.In 2011, van Straten was cast in the fantasy television series Once Upon a Time as the evil fairy Maleficent (the wicked fairy godmother, using the name from Disney's Sleeping Beauty), the rival of the Evil Queen of Snow White.van Straten currently plays a psychotic homelesswoman in the new Martin Guigui film PARADISE COVE.Todd GrinnellTodd Grinnell was born on March 29, 1976 in Massachusetts, USA as Todd A. Grinnell. He is an actor and director, known for playing Schneider on the hit series ONE DAY AT A TIME.  Todd is also recognized for his role as Dr. Alex Cominis on DESPERATE HOUSEWIVES and as Jason on FOUR KINGS. Among his film roles, HOLLYWOODLAND with Ben Affleck, DORFMAN IN LOVE and the upcoming THE TIME CAPSULE, in which he has the lead role. Grinnell also played Jon Dale on the MAD ABOUT YOU reboot.
Publicadas por Axel a la/s 9:07:00 p. m.