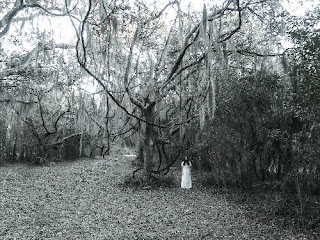 Horror Icon Jamie Bernadette Announces Directorial Debut Film “The Desecrated Ones”
Actress Jamie Bernadette (I Spit on Your Grave: Deja Vu, 4/20 Massacre, The 6th Friend), has officially announced her directorial debut feature film titled “The Desecrated Ones”. She has taken on a co-director, Amna Vegha (Homestead), and the two plan to go into production in February 2021.   The film, written by Jamie, explores how cycles of abuse can be assumed through generational abuse, relationships, or cultures. People imprisoned by abuse are living a horror movie. Jamie wants to unveil the terror and trauma victims of abuse endure. How does a young girl respond when left with the responsibility of breaking a perpetual cycle of inherited abuse? Jamie and Amna have launched an Indiegogo Campaign to raise funds for their new film. They are including many perks for contributing, including: actors’ costumes, signed posters, movie props, a PDF of the script once it’s distributed, a chance to virtually meet the cast and crew, printed and bound concept art books, and much more. Even Meir Zarchi, writer/director of I Spit on Your Grave, has jumped on board the fundraising efforts by signing a DVD and also a Blu Ray, which Jamie also signed, that will be rewarded to one lucky person in each category who contributed. Many of these perks are available only via the Indiegogo campaign, and will become permanently unavailable once it expires. Once the film circulates the world, these items will become very valuable. Click the link below to get some exciting merch and bring their movie to life.
Jamie has always wanted to write and direct a horror film that is as chilling as her favorite horror classics, but which also embodies an important cultural issue. She says, “The Desecrated Ones is a psychological horror film that explores abuse, the forms it comes in, the dangerous effects it can have on its victims, and the extraordinary lengths some must take in order to cope. The last film I co-wrote and produced, The 6th Friend, is a horror film about obsession with fame and attention in today’s social media-crazed world. So I like using film to address deep issues in society. I hope to scare people with this film - it’s horror! But I also hope to move them emotionally and bring light to this important issue. It’s definitely not going to be easy to watch, I can tell you that.”   Abuse and its ramifications are issues Jamie takes seriously, and the role she plays in this film will perhaps be her most complex and emotionally jarring to date. Jamie will lead the cast and reunite with actress Betsy Sligh (Homestead) and Brian Krause (Charmed, Sleepwalkers, Return to the Blue Lagoon, Homestead, et al.), and Amna will make her acting debut in the film, playing an eccentric character caught between her low class upbringing and her desire to manipulate others into a glamorous, wealthy lifestyle.  Co-director Amna says: “I met Jamie on the set of Homestead and instantaneously fell in love with her as an artist. We had almost identical artistic impulses and I was impressed by Jamie’s ability to bring the film to life as both an actor and executive producer. It truly wouldn’t have been the same film without her! I loved producing and designing Homestead - it’s a distinctive thriller that will take any audience on a wild ride, but I’ve always wanted to direct a disturbing horror film that touches something deep in viewers. I admire films like Hereditary, Midsommar, It Follows, and Get Out, because they use horror as a vehicle to explore difficult and relatable situations and involve or allude to the occult. When Jamie sent me her script, I was blown away. It’s a film that is both deeply disturbing and bizarrely touching. Unlike many of today’s films, The Desecrated Ones doesn’t forcefully overlay the issue of abuse on the story. Conversely, Jamie takes it on naturally through the plot and fully fleshed-out characters; it’s a topical horror film that never feels forced. Jamie’s ability to invent unconventional characters that feel real and to go between sophisticated, rhythmic prose and crass dialogue makes the film unlike any other.”
Publicadas por Axel a la/s 7:32:00 p. m.