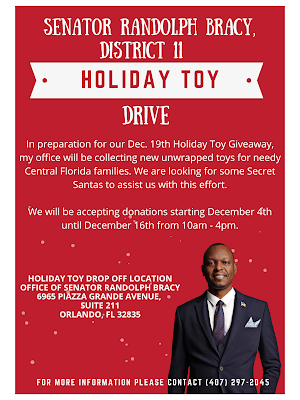 This year has been particularly rough on many Central Florida families, and we are seeking to spread a little holiday joy during this "Season of Giving".

My district office will be accepting new unwrapped toys from Dec. 4th until Dec. 16th. This is preparation for our Holiday Toy Giveaway on Dec. 19th.Please spread some holiday cheer for some deserving children
Senator, Randolph Bracy
Member of the Florida State Senate
Randolph Bracy III is a Democratic member of the Florida Senate, representing the 11th district, which includes central and northwest Orange County, since 2016. He served in the Florida House of Representatives from 2012 to 2016, representing the 45th district.
Publicadas por Axel a la/s 2:40:00 p. m.