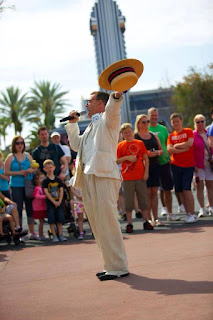 StoryMaven podcast to share insights for job seekers and leaders on conquering the challenges of 2020.

All three have a Disney background and talk with StoryMaven host Alice Fairfax, herself a former Walt Disney World storyteller, who chose the three interviews to close out the year.  “As we come out of the shock of this year and grapple with job loss and career changes, we need to know how to chart our own path,” said Fairfax. “These three experts offer a unique perspective on how to move forward.”

Michael James Scott, originator of several Broadway roles and the most recent Genie in Disney’s Aladdin on Broadway boils down his approach to life in one word: Fierce. With the shutdown of his Broadway run of Aladdin in March and the racial reckoning over the summer, Scott took to the studio. His purpose to “protest with joy” by creating his first holiday album, “A Fierce Christmas”. In the December 10 episode of StoryMaven, Scott discusses the purpose for the album, how he told his own story through classic songs, and what it means to be ‘Fierce’.

Global speaker and author of the new book “Service is a Super Power” Louie Gravance makes his expertise personal for the over 30,000 Disney Cast Members looking for work. “Just because you’re not practical, doesn’t mean you’re not relevant,” said Gravance in the December 21 episode. Speaking to those in hospitality and the entertainment industry hit hardest by the shutdown, Gravance reminds listeners that customer service is a driver for major companies. He and Fairfax discuss the importance of a brand story that customers can co-star in. Gravance encourages those recently laid off to see their skills in customer service as a high-value commodity. Once an iconic character in the Citizen’s of Hollywood troupe at the Walt Disney World Resort, Gravance went on to become designer and facilitator of customer service trainings for Disney Institute before launching his own speaking career.

In a two-part interview Executive Life Coach Elizabeth Dean closes out the year with a discussion on her work with CEOs and how to take your career to the next level. Once a singing mermaid in the “Voyage of the Little Mermaid” show at Walt Disney World, Dean has become a go-to coach for C-suite executives on leadership. In the first episode, releasing Wednesday, December 30, 2020, Dean shares her own journey from Disney actor to her dream job as an executive coach. The advice she gives on the podcast reflects what she says to CEOs on leadership: “Turn up the volume on who you are in your role.”

In the second interview, airing January 6, 2021, Fairfax and Dean discuss the neuroscience behind mindset and creating your own story. “Getting what you want is not the problem. Knowing what you want (is) [sic],” Dean said. In the episode the two discuss how to gain clarity then create a story that leads to a mindset shift.

Alice Fairfax launched the StoryMaven podcast to help nonprofit leaders and entrepreneurs better tell their stories. When the pandemic shut down Fairfax’s live workshops, she turned to podcasting to share storytelling tools and behind-the-scenes secrets. Fairfax was once an improvisational storyteller at Walt Disney World.

The StoryMaven podcast is available on iTunes, Spotify, Google Podcasts, and wherever you get your podcasts. For more information and free resources visit alicefairfax.com.

Speaker and author Alice Fairfax was an improvisational entertainer at Walt Disney World for over 20 years, including being ‘friends’ with one iconic character. (Hint: she owns a magic wand and turns pumpkins into vehicles.) Fairfax holds a certificate in Creativity & Innovation from the Walt Disney Company and Harvard Business School Publishing and a Liberal Arts Degree from Rollins College. A speaker and published author, she was also a publicist for Broadway tours and created over 30 campaigns including tours of Hamilton and Les Misérables.

She trains leaders on the creative process and storytelling techniques. Her workshops and the StoryMaven podcast give nonprofit leaders and entrepreneurs tools to help them increase engagement through the use of stories in social media, marketing, and speeches. For more information visit alicefairfax.com.