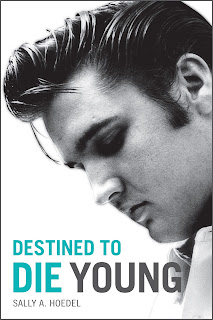 Could anyone or anything have saved the King of Rock ‘n’ Roll, or was Elvis Presley Destined to Die Young? In Sally Hoedel’s captivating, expertly researched book into the health struggles of Elvis, she reveals compelling evidence of a genetic legacy of chronic medical conditions that not even the King himself could overcome.

The world lost Elvis Presley on August 16, 1977, when he was just 42 years old. News reports painted him as bloated and unconscious on his bathroom floor, leaving devastated fans with a graphic, tarnished final image of their shiny idol from Tupelo. Toxicology reports confirmed that he was overloaded with prescription medications — just another cliché, a rock star who popped one too many pills.

Historian and author Sally Hoedel, however, doesn’t see Elvis as a cautionary tale of self-destruction. Instead, she sees a man who struggled, every day, to survive.

In her compelling, thought-provoking new release, Elvis: Destined to Die Young, Hoedel offers factual and scientific data, plus never-before-published information she gained by interviewing people who personally knew Elvis, to dive deep into his struggles with multiple chronic health conditions.

Hoedel examines Elvis Presley — devoted son, husband, father and friend — while plowing through the negative hype and legendary myths surrounding the man. Elvis’ downward spiral of health struggles is intertwined with his life story, and for the first time, it is revealed that he suffered from disease in nine of eleven bodily systems. Five of those disease processes, Hoedel finds, were present from birth. She expertly puts all of this into historical context, pointing out differences in medical treatments and protocols for the time.

Hoedel’s extensive research provides answers to lingering questions about his death and dispels the long-held theory that abuse of prescription drugs is what killed Elvis. Readers may be surprised to learn that, based on Elvis Presley’s family history and the genes he was dealt, nothing could have saved the King of Rock ‘n’ Roll. The result is a totally fresh, unique, humanizing approach to Elvis.

“I wrote this book because I genuinely believe this is a story that Elvis would want known,” Hoedel says. “He needed to be a strong American male while he was alive, and he hid his pain and his body’s weaknesses. Yet, he always knew he was just like everyone else: human. I believe he would be OK with everyone now understanding just how human he was. He struggled but he tried. My only hope for this labor of love is that it makes someone stop and think about Elvis just a little bit differently. He deserves it.”

Sally A. Hoedel, a lifelong Elvis fan and historian, has a journalism degree from Michigan State University and is co-owner of Character Development and Leadership, a curriculum business. She lives in Northern Michigan with her husband and their four daughters.